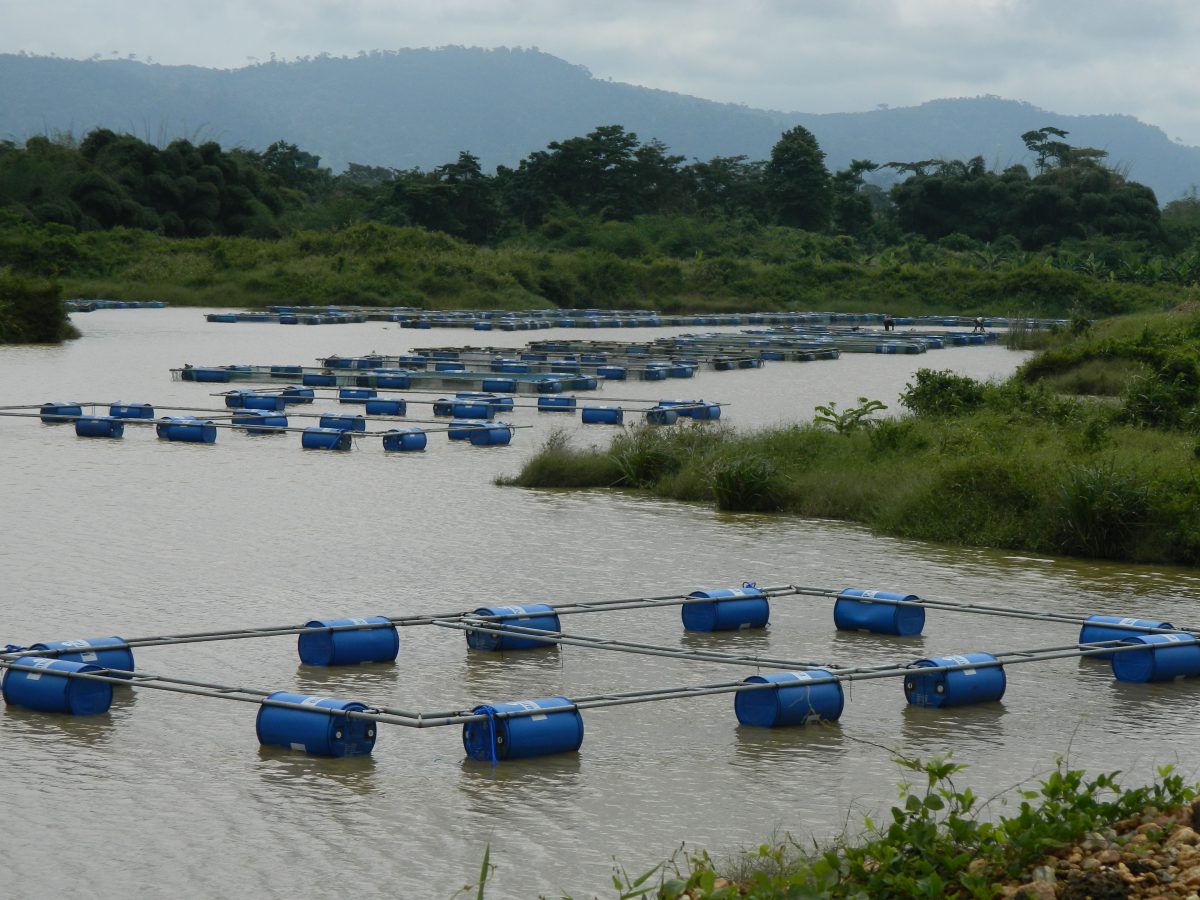 Mining operations have often been associated with extreme ecosystem degradation, leaving the land unsuitable for any alternative use. In the town of Osino in Ghana, mining activities had contributed to severe ecosystem degradation. To ensure the sustainability of the affected community, planning restoration methods carefully was crucial for the ecological, social and economic well-being of the local community.

The Solar Fish Farm project, a small fish farm in Osino, is the result of collaborative restoration planning efforts by the Solar Fish Farm Enterprise, the local community and the Environmental Protection Agency in Ghana. They are working towards maintaining and restoring the landscapes’ visual quality and ecological function in the mined out area, while at the same time provide quality fish stocks to feed the local market. This project is truly innovative as it’s the first of its kind in the region and is already, after four years of operation, returning economic, social and ecological benefits back to the local community

The town of Osino in Fanteakwa South District of the Eastern Region of Ghana is a landscape defined as semi-deciduous tropical rainforest, characterised by drying and shedding of leaves in the dry season. The topography of the area is generally hilly and rugged with undulating landforms. Underlying these land masses are several types of rocks or parent material from which different soils have developed. These parent materials include the Birimian formation with their associated rocks such as phyllites, schist and granites in the south and west and Voltaian metamorphosed sediments in the north and east. Most of the hills are capped with iron pans, bauxite and kaolin although gold and bauxite are also embedded within these rocks.

The district is well drained with several rivers portraying the trellised drainage pattern system. Most of these rivers are seasonal, where they overflow their banks during the rainy season and dry up during the dry season.

In Ghana, the mining industry contributes substantially to the socio–economic development of the country, specifically in the gold sector, and has increased significantly since the beginning of the century. Mining operations are known to cause severe environmental problems by altering landscapes and causing ecosystem degradation that affect the livelihoods of local communities in Ghana. Therefore, once a mining operation has ended, planning restoration methods carefully is crucial for the ecological, social and economic well-being of the local community.

The original thick forest cover, in Osino, has throughout the years consistently been plagued by mining activities, indiscriminate logging, charcoal burning and inappropriate farming methods leading to severe erosion and deforestation. A small scale alluvial mining concession, called Osompa Mining Company Limited, operated a gold mining production from June 2007 – May 2015 in the area.

Although the mining operation had been a large economic player within the local community, the operation had also contributed to severe ecosystem degradation in the form of erosion, deforestation and alteration of the topography. Vast portions of land and vegetation were cleared to accommodate the mining operations. The operations also involved the creation of pits or slime ponds for the disposal of the excess waste from the mining process. This resulted in loss of vegetative cover and soil nutrient depletion thus making the land unproductive and susceptible to erosion and excessive runoff during raining seasons.

The project is managed by Solar Fish Farm Enterprise, with the involvement of other key members of the community such as the Chief of Osino, the Environmental Protection Agency (EPA), in the Eastern Region of Ghana, the Assemblyman of the area, and local landowners.

Reclaiming the slime ponds created from the mine waste and putting them into an economic use was extremely important for the community of Osino since these pits have great potential to damage the environment. Instead of backfilling the mined out pits, as is common in mined out areas in the region, the Osompa Mining Company converted the pits into ponds efficient for aquaculture production. This production has brought into existence a fish farm project known as the Solar Fish Farm Enterprise.

Currently, the Solar Fish Farm Enterprise has 46 floating net cages, the size of 6 × 6 × 4.5 m, with a stocking capacity of 5,500 – 6,000 fingerlings for a period of nine months before they are ready for sale. The project also has its own hatchery where fingerlings are bred. The fish farm serves as a source of revenue for the employer and employees. Production is estimated to be about ten tons per annum which fetches quite a sum for the company. In addition, other spin-off businesses, such as for example cold operators, have realised substantial profits from the sales of the fish. The project thus benefits the local community as a whole.

To ensure sustainability of the initiative for the affected community, restoration methods are carefully being planned and is based on recommendations from the Environmental Protection Agency (EPA) in the Eastern Region of Ghana. It is worthy to mention that alluvial gold mining which is widely practiced in the Eastern Region does not make use of any chemical, and therefore chemical pollution is not an associated problem with the aquaculture project.

The Solar Fish Farm Enterprise has increased water conservation with re-vegetation efforts on the embankments of the dams. Plant species such as mahogany, lemon and lime prevent the water from drying up and ensures that water will be sufficient all year round. These tree species also improve the organic content of the soil, thus enhancing soil fertility and soil quality in the area. The water stored in the dams is used as a water resource for plants and animals within the catchment area. As a result, some plant and animal species that were on the verge of extinction have now resurfaced.

At the inception of the project, the project owner who was the managing director of Osompa Mining Company, invested his proceeds from the mining to commence operation. The company in its current stage has no external funding or support but relies on its own revenue for the day to day operations. It ploughs back its profits for the purpose of expansion, maintenance and any other operational cost, thereby limiting the growth rate of the company.

How to get in touch?